Many of you may have seen this as it was breaking, but it bears repeating given the dirty-dealings up on the Hill recently.

Defense Secretary Leon Panetta’s testimony asserting that the United Nations and NATO have supreme authority over the actions of the United States military, words which effectively declare Congress a ceremonial relic, have prompted Congressman Walter Jones to introduce a resolution that re-affirms such behavior as an “impeachable high crime and misdemeanor” under the Constitution.

Judge Andrew Napolitano addressed an exchange on Wednesday between Sen. Sessions and Defense Secretary Leon Panetta regarding the Obama Administration's apparent belief that "international permission," but not congressional approval, is a necessary precondition for any military action by the United States.
Listen to the videos carefully.

Listen to what Former U.N. Ambassador John Bolton had to say about this. He was appalled by Panetta's statements, too!

AGAIN AND AGAIN PANETTA REITERATES THAT NATO/THE U.N./FOREIGN APPROVAL, NOT CONGRESS, CAN OKAY AMERICAN MILITARY INTERVENTION ANYWHERE ON EARTH! THAT IS NOT WHAT OUR CONSTITUTION SAYS!
Congressman Walter Jones was right to call such behavior an “impeachable high crime and misdemeanor” under the Constitution!

Here's an "official military map of the whole world, showing zones of responsibility"...
[See a larger version here:  World Divided   ]
"Responsibility'? NO, it's how the armies of the world have divvied up the planet! One military group okays another's presence, or not?
They don't need Congress to approve WAR...IT IS WAR TO ATTACK ANOTHER NATION, A PURE ACT OF WAR! 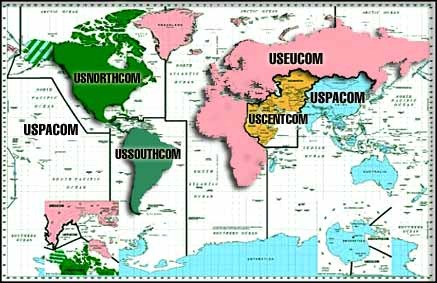 What will it take for Americans to say "ENOUGH!"?
It's sliding way south, folks, and if we don't erect an impenetrable barrier to TREASON now, it's going to roll right over us!

Did you know there was a "minor attempt" at a military coup this year? And SEVERAL years past?  Did you know that Rupert Murdoch actually tried to BUY the U.S. Presidency just last year? Maybe that's why the man he wanted for the Oval Office was taken down by scandal? The man Murdoch offered to bankroll for the 2012 election? General David Petraeus That's the next blog...

Posted by NotSocNoTea at 8:13 AM