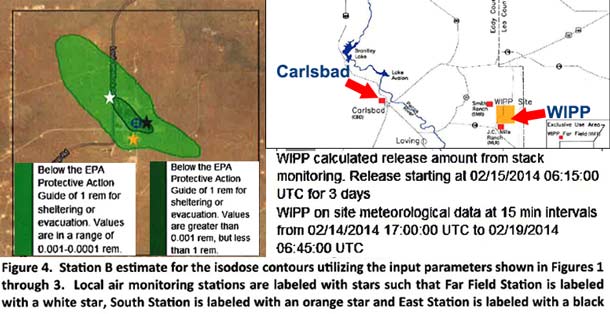 AMERICIUM AND PLUTONIUM LEAKED FROM NUCLEAR WASTE FACILITY BACK IN FEBRUARY....THERE ARE STILL NO REAL ANSWERS AS TO HOW MUCH, IN WHAT DIRECTION(S), OR HOW MANY WERE AFFECTED BY THIS ONGOING LEAK.
KRQE, Mar. 10, 2014 (emphasis added): WIPP radiation leak still a mystery ...contamination drifted across the countryside and 26 miles west, all the way to the city of Carlsbad itself. Nuclear experts told residents, worried about children, the WIPP contamination now confirmed to have reached town is not dangerous.The radiation leak is believed to be [in that panel, which is the length of a football field].

Don Hancock, Southwest Research and Information Center: "We don’t know how far away [contamination has] gone. That’s one of the questions that needs to be figured out."
"They still have amounts of radiation that they’re reading in the underground at WIPP. The DoE is saying that the filter system is 99.97% effective. We don’t know that that’s true because we don’t have laboratory results back, how much radioactivity those filters are actually catching. We are a long way from having all the sampling we need in the above ground to know how much is out. We can presume that minute amounts can still be coming out through the filter system even if the filter system is working perfectly. The filter system doesn’t work 100% perfect — 99.97%, if it is working that well is good, but that means there’s 0.03% that is getting out. So it will be a continuing problem until all of the contamination, both underground and above ground is cleaned up. [...] It’s a continuing potential threat to people for a long time to come."
SO, WHAT'S A LITTLE PLUTONIUM AND AMERICIUM GOING TO HURT?
New York Times: Plutonium and americium [...] lodged in the body bombards internal organs with subatomic particles for the rest of the person’s lifetime.

FROM THE EPA:
<<Plutonium is considered a man-made element, although scientists have found trace amounts of naturally occurring plutonium produced under highly unusual geologic circumstances. The most common radioisotopes of plutonium are plutonium-238, plutonium-239, and plutonium-240.
When inhaled, plutonium can remain in the lungs depending upon its particle size and how well the particular chemical form dissolves. The chemical forms that dissolve less easily may lodge in the lungs or move out with phlegm, and either be swallowed or spit out. But, the lungs may absorb chemical forms that dissolve more easily and pass them into the bloodstream.
Once in the bloodstream, plutonium moves throughout the body and into the bones, liver, or other body organs. Plutonium that reaches body organs generally stays in the body for decades and continues to expose the surrounding tissue to radiation.
External exposure to plutonium poses very little health risk, since plutonium isotopes emit alpha radiation, and almost no beta or gamma radiation. In contrast, internal exposure to plutonium is an extremely serious health hazard. It generally stays in the body for decades, exposing organs and tissues to radiation, and increasing the risk of cancer. Plutonium is also a toxic metal, and may cause damage to the kidneys.
EPA sets standards for radioactive waste storage and disposal facilities. We can't treat plutonium or other radioactive materials to get rid of their radioactivity. We can only isolate and store them until they decay. The extremely long half-lives of some plutonium radioisotopes make the management of spent nuclear fuel, and wastes from nuclear weapons facilities a difficult problem.>>

ELEVATIONS IN AIR SAMPLES HAVE GONE UP BY ALMOST 50% AND WERE REPORTED FOR THE PAST TWO DAYS BY LOCAL NEWS AGENCIES IN NEW MEXICO, THIS HAS NOT BEEN PICKED UP BY MAINSTREAM MEDIA!
WHY?

FROM THE ALBUQUERQUE JOURNAL
Wednesday, March 19, 2014
The Waste Isolation Pilot Plant (WIPP) on Tuesday reported a “very small” radiation release occurred last week that may have stemmed from contamination in the ventilation system.
One air sample collected March 11 from the ventilation exhaust showed increased levels of americium, but the levels remained below those deemed actionable by the Environmental Protection Agency.
In a statement, WIPP called the release “expected, given the amount of contamination captured by the WIPP ventilation system during the February 14 radiation release event.” Engineers say the contamination comes from previous deposits inside the exhaust ducts, WIPP reported.

A "VERY SMALL" LEAK IS STILL A LEAK AND THE THING IS STILL LEAKING.
A LEAK OF ANY AMOUNT OF AMERICIUM IS NEWSWORTHY!


What does americium-241 do once it gets into the body?

Once in the body, americium-241 tends to concentrate in the bone, liver, and muscle. It can stay in the body for decades and continue to expose the surrounding tissues to radiation, and increase your risk of developing cancer.
[IT HAS A HALF-LIFE OF 50 YEARS IN BONE AND 20 YEARS IN LIVER TISSUE, BUT IT NEVER LEAVES THE GONADS, NEITHER TESTICLES NOR OVARIES, SO ONCE THERE, IT IS THERE TO STAY.  SEE http://www.doh.wa.gov/ehp/rp/factsheets/factsheets-pdf/fs23am241.pdf , ALSO http://www.ead.anl.gov/pub/doc/americium.pdf]

<<in all these organs, americium promotes formation of cancer cells as a result of its radioactivity>>

When inhaled, some Am-241 remains in the lungs, depending upon the particle size and the chemical form of the americium compound. The chemical forms that dissolve easily may pass into the bloodstream from the lungs. The chemical forms that dissolve less easily tend to remain in the lungs, or are coughed up through the lung's natural defense system, and swallowed. From the stomach swallowed americium may dissolve and pass into the bloodstream. However, undissolved material passes from the body through the feces.
Americium is an artificial element, and thus a biological function involving the element would be impossible.
It has a half-life of 141 years, has the largest cross sections for absorption of thermal neutrons (5,700 barns), that results in a small critical mass for a sustained nuclear chain reaction.

As a highly radioactive element, americium and its compounds must be handled only in an appropriate laboratory under special arrangements. Although most americium isotopes predominantly emit alpha particles which can be blocked by thin layers of common materials, many of the daughter products emit gamma-rays and neutrons which have a long penetration depth.
FROM THE LAS CRUCES SUN
03/18/2014

CARLSBAD >> Radiation levels appear to be on the rise in Carlsbad and around the Waste Isolation Pilot Plant.
Air monitoring results since last month's radiation leak appear to show the amount of radiation trending upward near Carlsbad, but Department of Energy officials say there is no proof it is related to the leak.

WELL, BACK IN FEBRUARY WHEN THE LEAK WAS FIRST DETECTED, A COUNTY OFFICIAL CALLED IT A DISASTER...WHERE IS HE NOW?
No one knows yet how bad the situation is in that storage area, but the Department of Energy sent out a letter Wednesday to tell people in two counties what they do know so far.
DOE said 13 WIPP staff who were working above ground the day of the leak have tested positive for radiation.
Eddy County Manager Rick Rudometkin said “Whenever you have a disaster of any kind, there are always issues. You always mitigate the disaster and you move forward,” Rudometkin said.

Don Hancock, director of the Nuclear Waste Safety Program at Southwest Research & Information Center, said the Department Of Energy, which did not return our calls, will have to wait two or three weeks before anyone can safely go underground to assess the situation.

KRQE, Mar. 6, 2014: Many left Thursday night’s meeting with the Department of Energy uneasy. They pleaded for more information about the underground radiation leak last month that seeped outside, but many remain frustrated and concerned for their safety. The DOE tried to reassure people they are safe even though the underground storage areas remained sealed off.

U.S. Congressman Steve Pearce, Mar. 8, 2014: I Will Ask Tough Questions About Radiation Leak — “I will hold their feet to the fire. In my meetings with Secretary Moniz, and in my conversations with top officials at the Department of Energy, I have strongly voiced New Mexicans’ concerns about the lack of information about WIPP.”

National Atmospheric Release Advisory Center — Feb. 14th contamination release consequence assessment (pdf), Mar. 10, 2014:
“The plume projection shown in Figure 4 was generated by NARAC staff to represent the best measurement data available for prediction. [...] It is worth reiterating that a large number of assumptions go into the plume projections and the source term is currently based on measurement from a gross alpha and beta count”.

NOTHING TO BE CONCERNED ABOUT...UNLESS, OF COURSE, YOU LIVE NEAR THE LEAK SITE...OR DOWNWIND...
Posted by NotSocNoTea at 3:01 AM