SEVERAL NEWS AGENCIES REPORTED TODAY THAT A SURVEILLANCE VIDEO MAY HAVE CAPTURED IMAGES OF AT LEAST ONE BOMBER LEAVING A BAG BESIDE THE MARATHON ROUTE SHORTLY BEFORE THE SECOND EXPLOSION.

http://www.cbsnews.com/8301-201_162-57579984/boston-bombing-investigators-focus-on-individual-in-photo/
<<A surveillance camera at a nearby Lord and Taylor department store captured images of the man who was carrying a backpack and talking on a cell phone. The man was wearing a black jacket, a grey hooded sweatshirt and a white or off-white baseball cap backwards. He is 6 feet or 6-feet-2-inches tall with a medium build.
Investigators say the man, who seemed to be alone, put the backpack on the ground. Then, when the first explosion occurred at the finish line about 100 yards down Boylston Street, he took off. Just a few seconds later, the second bomb exploded near where the man had been standing.>>

REPORTED BY THE NEW YORK DAILY NEWS TODAY:The bomber suspect caught on video was spied on footage shot from a Lord & Taylor store and was reportedly wearing a black jacket, hooded sweatshirt and white baseball cap.
The camera — across the street from the second blast — was first mounted on the store back in the 1980s to combat robberies, according to the Boston Herald.
Positioned about halfway between the two blast sites, it captured a single man dropping off a bag near the point of the second explosion. Then he walked off.
The man seen on the video matched the description of a suspicious individual identified by eyewitnesses.
http://www.nydailynews.com/news/national/injury-toll-rises-marathon-massacre-article-1.1319080#ixzz2QnqDgBc6

SHORT AUDIO BELOW OF POLICE RADIO TRAFFIC
http://www.youtube.com/watch?feature=player_embedded&v=sOP8X3r9eCY
EARLY IN THIS VIDEO, VERY SHORTLY AFTER THE EXPLOSIONS, A POLICEMAN CAN BE HEARD REQUESTING HELP AS HE HAD FOUND OTHER EXPLOSIVE DEVISES....BETWEEN 19 SECONDS AND 24 SECONDS INTO THE AUDIO.
BOSTON POLICE HAD PREVIOUSLY SAID THAT WAS NOT TRUE.

EXTENDED 1 hr 30 minutes of the same police radio audio, for those who wish to wade through such can be found at  http://justin.tv/radioman911/c/2161012

Man on rooftop overlooking finish line...
http://antinewworldorderparty.files.wordpress.com/2013/04/bostonmass2.jpg
SAID TO BE SECURITY INITIALLY, BUT THAT HAS CHANGED NOW...

TODAY WE SEE A PHOTO OF OFFICERS WITH A CRANE HANDING DOWN AN EVIDENCE BAG FROM A ROOFTOP. SO, NOW, THE ROOFTOP MYSTERY MAN MAY BE A "PERSON OF INTEREST" AFTER ALL?
THE CAPTION READS:  Investigators lower an evidence bag collected from a roof top near the site of two explosions at the finish line of the Boston Marathon in Boston, Massachusetts April 17, 2013. 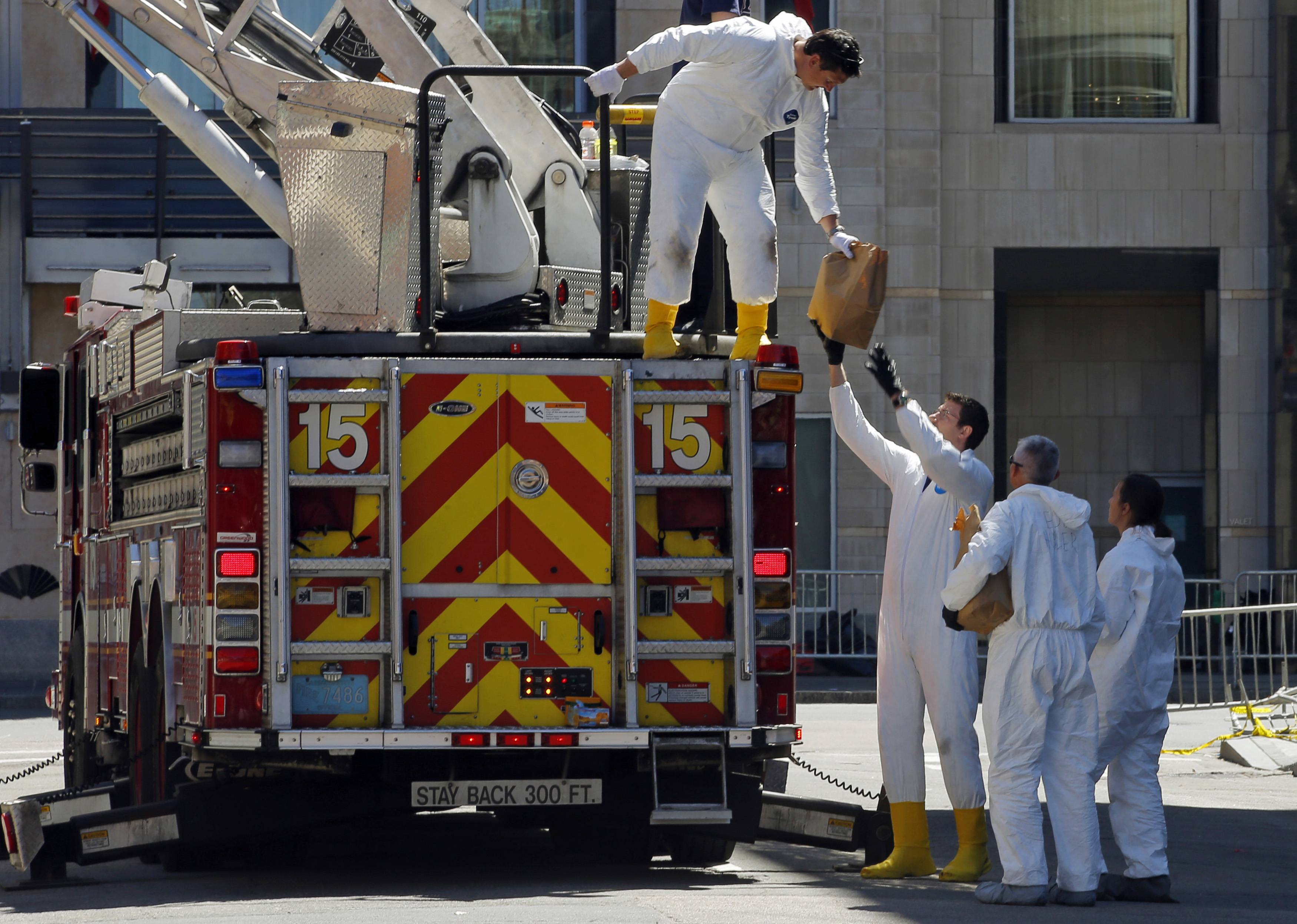 AND WE ALSO READ TODAY THAT BOSTON POLICE ARE DEFINITELY LOOKING INTO THIS.
MYSTERY MAN ON THE ROOFTOP NEAR THE FINISH LINE.
Updated: 04/16/2013 7:21 pm EDT
PHOTOS TAKEN JUST BEFORE EXPLOSIONS
http://www.huffingtonpost.com/2013/04/16/mystery-man-on-roof-boston-bombings-photo-_n_3091189.html
<<Talk of the mysterious man on the roof later reached the Boston Police Department and authorities are now reportedly investigating the photo, according to Yahoo! News. >>

One popular post yesterday reminded people to be careful where they point fingers with the question of who planted the bombs:
<< “Does anyone remember Richard Jewell?” the thread asks.

In 1996, Jewell was a security guard at the Atlanta Olympic Games, who found a bomb in a backpack and manage to evacuate the area before it exploded, saving many lives. But he was suspected of planting the bomb himself, and before he was cleared (and the real bomber arrested), he had been subjected to public shame and judgment. The poster cautions: “You should be very very careful about picking and choosing who you think might have killed three people and wounded many more, based on where they were standing and if they were carrying a backpack or not.”

A misplaced suspicion, misused by a tense crowd desperately seeking justice, would only add to the grief we all feel. And it won’t get us closer to answers.>>

YES, WE MUST EXERCISE CAUTION IN OUR SEARCH FOR WHO DID THIS TERRIBLE THING, BUT WE MUST ALSO ASK ALL POSSIBLE QUESTIONS, FIND THE TRUTH, NO MATTER WHAT AND NO MATTER WHO IS GUILTY OF THIS HEINOUS ACT.

THE BOSTON POLICE, FACED WITH THE RECORDED STATEMENTS IN AN INTERVIEW OF A VERY CREDIBLE WITNESS, A COACH WHO RAN THE MARATHON, WERE ASKED WHY THEY GAVE MEGAPHONE WARNINGS TO RUNNERS ABOUT A "DRILL" AND TOLD THEM NOT TO BE ALARMED.
THEY DENIED MAKING SUCH ANNOUNCEMENTS.

THE FACT THAT THE BOSTON GLOBE ALSO TWEETED ABOUT "CONTROLLED EXPLOSIONS ON 600 BLOCK OF BOYLSTON STREET" 2 HOURS BEFORE THE FIRST BOMB SEEMS TO HAVE BEEN BURIED OR IGNORED BY JOURNALISTS HERE.

THAT THE FINISH LINE WAS AT 666 BOYLSTON, BUT IN POLICE RADIO AUDIO OFFICERS ARE REQUESTING HELP FOR POSSIBLE UNEXPLODED DEVICES AT THE 750 BLOCK AND INITIAL REPORTS BY AT LEAST 3 OTHER MAINSTREAM MEDIA SAID FIVE SUCH DEVICES WERE LOCATED, WITH ONLY ONE LATER DETONATED BY WATER CANNON (SEE PREVIOUS POST) ALSO HAVE BEEN DROPPED FROM MEDIA DISCUSSION.

OUR HEARTS GO OUT TO THE FAMILIES OF ALL THE VICTIMS, AND WE CAN BUT TRUST THAT THE GUILTY WILL BE ARRESTED AND SUCH WILL NEVER HAPPEN AGAIN.