VIDEO OF THE ENCOUNTER AND ITS TRAGIC END

TWO BROTHERS FROM CHECHNYA HAVE BEEN IDENTIFIED AS THE SUBJECTS OF A MANHUNT IN THE BOSTON MARATHON BOMBINGS AND ONE BROTHER HAS BEEN KILLED IN A SHOOTOUT WITH POLICE.
KILLED WAS THE OLDER BROTHER, TAMERLAN TSARNAEV, 26.
SURVIVING YOUNGER BROTHER, DZHOKHAR A. TSARNAEV, 19, IS THE SUBJECT OF A POLICE MANHUNT AND HIS WHEREABOUTS ARE UNKNOWN.
THERE WERE SEVERAL EXPLOSIVE DEVICES DETONATED AND LEFT BEHIND DURING AND AFTER THE CONFRONTATION WITH  MASSACHUSETTS LAW ENFORCEMENT, SEVERAL OFFICERS WERE EITHER WOUNDED OR KILLED.

The pursuit began after 10 p.m. Thursday when two men robbed a convenience store in Cambridge. A security camera caught a man identified as one of the suspects wearing a gray hooded shirt.
About 10:30 p.m., the police received reports that Sean Collier, a campus security officer at M.I.T., had been shot while he sat in his police cruiser. He was found with multiple gunshot wounds, according to a statement issued by the acting Middlesex district attorney, Michael Pelgro, Cambridge Police Commissioner Robert C. Haas and the M.I.T. police chief, John DiFava. The officer was taken to Massachusetts General Hospital, where he was pronounced dead.
A short time later, the police received reports of an armed carjacking of a Mercedes sport-utility vehicle by two males in the area of Third Street in Cambridge, the statement said. “The victim was carjacked at gunpoint by two males and was kept in the car with the suspects for approximately a half-hour,” the statement said. He was later released, uninjured, at a gas station on Memorial Drive in Cambridge.

The police immediately began to search for the vehicle and pursued it into Watertown. During the chase, “explosive devices were reportedly thrown from car by the suspects,” the statement said, and the suspects and police exchanged gunfire in the area of Dexter Avenue and Laurel Street.

The officer had nearly bled to death from a gunshot wound to his right leg when he arrived at the hospital, said a person familiar with his treatment. The hospital’s trauma team gave him a blood transfusion and cardiopulmonary resuscitation, and got his blood pressure back up, but he was still on a ventilator, the person said.

A Watertown resident, Andrew Kitzenberg, 29, said he looked out his third-floor window to see two young men of slight build in jackets engaged in “constant gunfire” with police officers. A police S.U.V. “drove towards the shooters,” he said, and was shot at until it was severely damaged. It rolled out of control, Mr. Kitzenberg said, and crashed into two cars in his driveway.

The two shooters, he said, had a large, unwieldy bomb that he said looked “like a pressure cooker.”

“They lit it, still in the middle of the gunfire, and threw it,” he said. “But it went 20 yards at most.” It exploded, he said, and one man ran toward the gathered police officers. He was tackled, but it was not clear if he was shot, Mr. Kitzenberg said.

Meanwhile, Mr. Kitzenberg said the other man got back into the S.U.V., turned it toward officers and “put the pedal to the metal.” The car “went right through the cops, broke right through and continued west.”

The two men left “a few backpacks right by the car, and there is a bomb robot out there now,” he said.

During this exchange, an MBTA police officer was seriously wounded and taken to the hospital.

At the same time, Tamerlan Tsarnaev was critically injured with multiple gunshot wounds and taken to Beth Israel Deaconess Hospital in Boston, where he was pronounced dead at 1:35 a.m., officials said.

Col. Timothy P. Alben of the Massachusetts State Police said investigators believed that the two men were responsible for the death of a Massachusetts Institute of Technology police officer and the shooting of an officer with the Massachusetts Bay Transportation Authority, the region’s transit authority. “We believe these are the same individuals that were responsible for the bombing on Monday at the Boston Marathon,” he said.
Officials said that the two men were of Chechen origin. Chechnya, a long-disputed, predominantly Muslim territory in southern Russia sought independence after the collapse of the Soviet Union and then fought two bloody wars with the authorities in Moscow.

The family lived briefly in Makhachkala, the capital of the Dagestan region, near Chechnya, before moving to the United States, said a school administrator there. Irina V. Bandurina, secretary to the director of School No. 1, said the Tsarnaev family left Dagestan for the United States in 2002 after living there for about a year. She said the family — parents, two boys and two girls — had lived in the Central Asian nation of Kyrgyzstan previously.
http://www.nytimes.com/2013/04/20/us/boston-marathon-bombings.html?_r=0


THIS IS THE SURVIVING BROTHER, DZHOKHAR TSARNAEV, AGE 19. 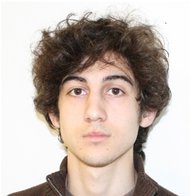 HOW SAD THAT SUCH YOUNG MEN WITH SO MUCH TO LIVE FOR HAVE COME TO THIS END. PERHAPS THIS YOUNGER BROTHER WILL SURRENDER AND BE SPARED THE DEATH HIS BROTHER RECEIVED.
WHO CAN SAY IF THESE TRULY ARE THE BOMBERS?
SOMETIMES WE TEND TO "JUMP THE GUN" IN AMERICA. I HOPE THIS IS NOT SUCH AN INSTANCE.

AND I HOPE YOU ARE ALL WELL AND SAFE WHEREVER YOU ARE.