EUROPEAN UNION TO SANCTION AMERICA FOR SPYING ON EU OFFICES

OOPS! BUSTED!
BUT, HEY, IT ISN'T LIKE THIS IS THE FIRST TIME!
JULY 1, 2013
THE U.S. INSTALLED COVERT LISTENING DEVICES IN EUROPEAN UNION OFFICES...AND THEN...
WELL, SOME EU MEMBER NATIONS ARE CALLING FOR SANCTIONS AGAINST THE WHOLE COUNTRY!
FROM BONN, GERMANY...GOOD ONE, GUYS! 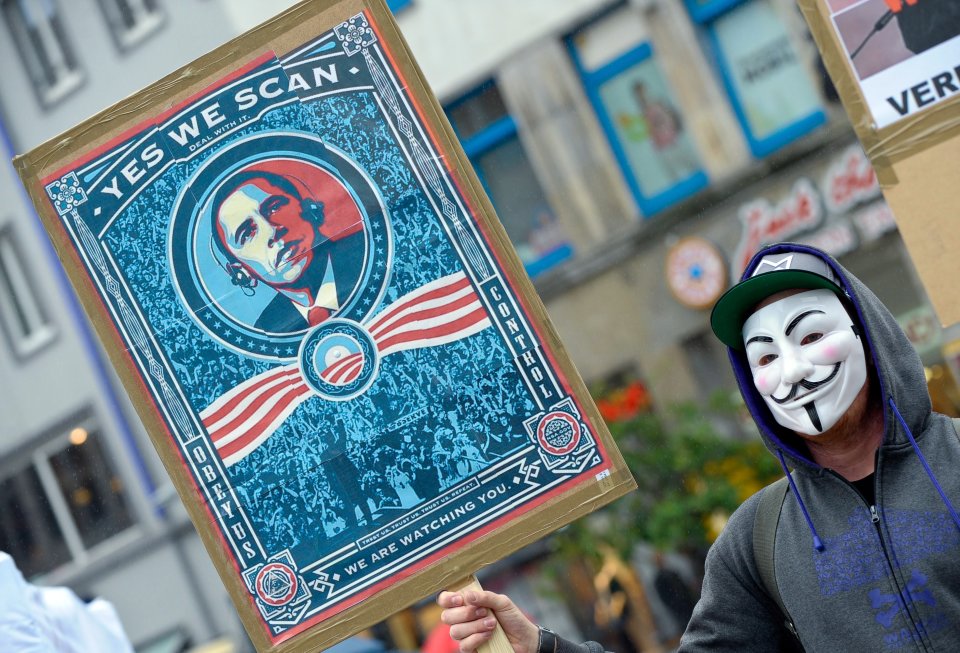 They threatened investigations and sanctions against the US, in the latest backlash in the global debate over the reach of US surveillance that aims to prevent terror attacks.

US intelligence officials said they will discuss with EU officials the new allegations, reported in yesterday’s editions of the German news weekly Der Spiegel.>>

<<Several European officials — including in Germany, Italy, France, Luxembourg and the EU government itself — said the new revelations could scuttle ongoing negotiations on a trans-Atlantic trade treaty that, ultimately, seeks to create jobs and boost commerce by billions annually in what would be the world's largest free trade area.
"Partners do not spy on each other," said EU Justice Commissioner Viviane Reding. "We cannot negotiate over a big trans-Atlantic market if there is the slightest doubt that our partners are carrying out spying activities on the offices of our negotiators. The American authorities should eliminate any such doubt swiftly.">>

NO, NOOOO! ANYTHING TO STOP YET ANOTHER "TRADE AGREEMENT"!!!!
WHAT CAN AMERICA DO TO ENSURE THAT THERE WON'T BE ANOTHER BLOODY, JOB-STEALING, MONEY-SUCKING TRADE AGREEMENT?
I'LL DO ANYTHING!
OH, PLEASE, PLEEEEEEASE, LET THIS "SCUTTLE" THOSE NEGOTIATIONS!

I'M SORRY (WELL, NOT REALLY) BUT IF ANYONE IN THE EU, OR ANYWHERE ELSE IN THIS SOLAR SYSTEM, BELIEVES FOR ONE SWEET SECOND THAT AMERICA WON'T "SPY" ON THEM, THAT PERSON IS DUMBER THAN A BOX OF ROCKS!
TO IMAGINE THAT SANCTIONS OR INVESTIGATIONS OR EVEN OFFERING HUMAN SACRIFICE WILL STOP AMERICA FROM "EAVESDROPPING" IS LIKE IMAGINING JOHN MCCAIN NAKED...IT'S JUST WRONG!
DREAM ON, EU!

YOU'VE BEEN SPIED ON SINCE BEFORE WW2!
OPERATION GLADIO, REMEMBER THAT?
The role of the Central Intelligence Agency (CIA) in sponsoring 'Gladio' and the FULL extent of CIA activities during the Cold War era, and its relationship to right-wing terrorist attacks perpetrated in Italy during the "Years of Lead" (late 1960s to early 1980s) and other similar clandestine operations, is the subject of ongoing debate and investigation but nothing has never been proven, or hasn't been proven enough to hang anyone for. Switzerland and Belgium have had parliamentary inquiries into the matter, but so far, zip!
Belgium, France, Denmark, Germany, Greece, the Netherlands, Norway, Portugal, Turkey, the United Kingdom, Austria, Cyprus, Finland, Spain, Sweden, Switzerland...the list is long, long of nations that uncovered spy networks and American collection of "intelligence" within their borders!
WHY IMAGINE THAT WILL STOP BECAUSE THEY WERE "DISCOVERED" AGAIN?
IF 60 YEARS DOESN'T CHANGE THINGS, WILL ANOTHER 60?
GET REAL!
AMERICA "NEEDS" TO SPY ON THE EU!
IT'S ALL IN THE NAME OF "HOMELAND SECURITY", "NATIONAL SECURITY"...OR SOMETHING ELSE THE FEDS CAN CONJURE UP "PDQ", JUST GIVE 'EM A DAY OR 2 TO WORK ON A COVER STORY...IT'LL COME.

MEANWHILE, DOES ANY OF THIS SOUND FAMILIAR, EUROPE?
~Gladio has been accused of trying to influence policies through the means of "false flag" operations.
<GASP!> NO, REALLY? DUHHHHH...WE DO THAT NOW....STILL!
~Gladio has been accused of killing key political and business figures, and of using the Mafia for same.
NOTHING NEW HERE, MOVE ALONG...THEY HAVE THIS DOWN TO A 'SCIENCE' THESE DAYS!
~Gladio has been accused of laundering money...and the Vatican has been named as a "co-conspirator" on more than one occasion (remember 'BANCO AMBROSIANO" 1981-1982?).
SAY, THAT PAIR IS STILL TOGETHER, CIA AND VATICAN BANK...AND THEY SAID IT WOULDN'T LAST!
~Gladio led to other covert operations.
OLD NEWS...ALWAYS HAS, ALWAYS WILL LEAD TO NEW THINGS...THAT'S JUST OUR BELOVED CIA...SO?
OPERATION CONDOR (WHICH WAS AN OFFSHOOT OF GLADIO) WASN'T THAT BAD, WAS IT?
ACTUALLY, CONDOR IS COMING BACK TO HAUNT THE U.S.
http://www.aljazeera.com/programmes/insidestoryamericas/2013/03/2013367461442124.html

AND SHAME ON THE UK, BECAUSE THEY VERY MUCH AGREED TO SPYING ON EVERYONE ELSE! [SEE VIDEO AT END OF BLOG]
THEY EVEN HELPED THE U.S. CONCOCT THAT BULL ABOUT GLADIO BEING LEFT IN PLACE TO "COMBAT THE SOVIET THREAT" .
AND THAT IS HOW YOU LOST YOUR GOLD, GERMANY...IT WAS TOO DANGEROUS BECAUSE OF THOSE NASTY OLD COMMUNISTS TO LEAVE IT IN EUROPE, REMEMBER?
<<A briefing minute of June 1, 1959, reveals that Gladio, 'in case of Soviet military invasion' of the country, considered a concrete possibility at the time, had to organize resistance by 'internal subversion' rather than by trying to make plans for open warfare. >>
SEE? INTERNAL SUBVERSION IT WAS...AND IS, EU.
YOU KNEW IT WAS THERE, YOU SURELY DIDN'T THINK SOMETHING THAT 'GOOD' WOULD BE DISMANTLED, DID YOU?
HAVING THE CIA ANYWHERE IS LIKE HAVING CHICKENPOX...SURE THE ITCHING AND BLISTERS GO AWAY, BUT THE VIRUS ITSELF NEVER DOES. IT BECOMES PART OF THE BODY...IT REMAINS.
TSK, TSK, TSK.

BACK TO THE WHINE...
<<European Parliament President Martin Schulz said he was "deeply worried and shocked about the allegations of U.S. authorities spying on EU offices." And Luxembourg Foreign Minister and Deputy Prime Minister Jean Asselborn said he had no reason to doubt the Der Spiegel report and rejected the notion that security concerns trump the broad U.S. surveillance authorities. >>

HANG ON!
DOES THE EU, CAN THE EU BE THINKING THAT THAT "SPYING" IS ONLY CONCENTRATED ON AMERICAN SOIL, IN SPITE OF GLADIO?
ONLY IN AMERICA?
BWAAA HAAAAA HAAAA! WHAT A LUDICROUS ASSUMPTION!
<<According to Der Spiegel, the NSA planted bugs in the EU's diplomatic offices in Washington and infiltrated the building's computer network. Similar measures were taken at the EU's mission to the United Nations in New York, the magazine said. It also reported that the NSA used secure facilities at NATO headquarters in Brussels to dial into telephone maintenance systems that would have allowed it to intercept senior officials' calls and Internet traffic at a key EU office nearby.>>
WHY IS THE U.N. LOCATED IN NEW YORK, USA?
THE BETTER TO SPY ON YOU, NATIONS OF EARTH!
SILLY TO THINK OTHERWISE!
NOW, IMAGINE THAT ALL OVER EUROPE, EVERY OFFICE...THE U.S. DOES HAVE THAT CAPABILITY, BY SATELLITE, BY WEE "BUGS" DEVELOPED BY THE LIKES OF DARPA, AND EVER THE NSA, ALWAYS, INCESSANTLY LISTENING IN, READING EVERYTHING...
YOU CAN DREAM THAT THIS WAS ONLY HAPPENING IN AMERICA, EU, BUT YOU'D BE STUPID TO BELIEVE THE DREAM.
<<Britain's The Guardian newspaper published an article Sunday which said that one document lists 38 NSA "targets," including embassies and missions of U.S. allies like France, Italy, Greece, Japan, Mexico, South Korea, India and Turkey.>>
SURPRISE, SURPRISE, SURPRISE, "ALLIES"! TAKE THAT!

MY FAVORITE "SAYING" HAS ALWAYS BEEN "LEARN, OR PERISH!"
YOU JUST DON'T LEARN, NATIONS WHO ARE NOT AMERICA!
HOW MANY TIMES HAVE YOU ALL CAUGHT AMERICA'S "INTELLIGENCE COMMUNITY" DOING THIS SORT OF THING? MILLIONS?
A GOOD DEFINITION OF INSANITY IS "DOING THE SAME THING OVER AND OVER IN THE SAME WAY,  EXPECTING A DIFFERENT OUTCOME".
YOU MUST BE INSANE, EU!
BUT GO AHEAD, FALL FOR THE SPIEL AGAIN...
"AMERICA APOLOGIZES FOR THE OOPSIES, AGAIN, AND SWEARS TO HEAVEN THAT THIS WILL NEVER, EVER HAPPEN AGAIN...UNTIL NEXT TIME."
SWALLOW HARD, EU, SWALLOW HARD.

I MEAN, LOOK WHAT SOMEONE WHO USED TO HEAD THAT "DEPARTMENT" SAID ON PUBLIC, PRIME TIME TV!
<<Speaking on CBS' "Face the Nation," former NSA and CIA Director Michael Hayden downplayed the European outrage over the programs, saying they "should look first and find out what their own governments are doing." But Hayden said the Obama administration should try to head off public criticism by being more open about the top-secret programs so "people know exactly what it is we are doing in this balance between privacy and security."
"The more they know, the more comfortable they will feel," Hayden said. "Frankly, I think we ought to be doing a bit more to explain what it is we're doing, why, and the very tight safeguards under which we're operating."
Hayden also defended a secretive U.S. court that weighs whether to allow the government to seize Internet and phone records from private companies. The Foreign Intelligence Surveillance Court is made up of federal judges but does not consider objections from defense attorneys in considering the government's request for records.
Last year, the government asked the court to approve 1,789 applications to spy on foreign intelligence targets, according to a Justice Department notice to Congress dated April 30. The court approved all but one — and that was withdrawn by the government.>>
DID YOU COPY THAT, AMERICAN CITIZENS?
"'THE MORE THEY KNOW, THE MORE COMFORTABLE THEY WILL FEEL...'"
ARE YOU COMFY WITH ALL THE SPYING?
YOU WILL BE...YOU MUST BE...IT'S THE "NEW ORDER" OF THINGS.
<< In Germany, where criticism of the NSA's surveillance programs has been particularly vocal, Justice Minister Sabine Leutheusser-Schnarrenberger likened the spying outlined in the Der Spiegel report to "methods used by enemies during the Cold War.">>
BINGO! WE HAVE A WINNER!
IT'S GLADIO CONTINUED, JUSTICE MINISTER, SIR!
WITH MAJOR "IMPROVEMENTS", THAT'S ALL.
Originally aired on BBC2 in 1992, 'Operation Gladio' reveals 'Gladio', the secret state-sponsored terror network operating in Europe.
This BBC series is about a far-right secret army, operated by the CIA and MI6 through NATO, which killed hundreds of innocent Europeans and attempted to blame the deaths on Baader Meinhof, Red Brigades and other left wing groups.
YES, IT'S OVER 2 HOURS LONG...IF THAT'S A PROBLEM, DON'T WATCH IT...
http://youtu.be/GGHXjO8wHsA