I AM SAD TO REPORT THE STRANDING DEATHS OF TWO VERY RARE WHALES JUST NORTH OF FUKUSHIMA PREFECTURE. 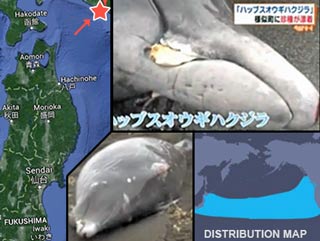 "This is a very rare Hubbs' beaked whale that ran aground.
Only 62 cases ever known of this species in the world,
18 cases ever spotted in Japan.
Another specimen was discovered stranded and dying nearby.
Both specimens were discovered alive but then died.

Specimens will be allocated to research facilities throughout Japan.
Cause of death and stomach contents will be studied."

THE SECOND SPECIMEN WAS INITIALLY IDENTIFIED ON APRIL 11 AS A STEJNEGER'S BEAKED WHALE, ALSO VERY RARE, AND EASILY CONFUSED WITH THE HUBB'S BEAKED WHALE.
[http://kujira110.com/?p=1713]

AMERICAN SOURCES SAY LESS THAN 40 OF THESE WHALES HAVE EVER BEEN REPORTED, AND, TO DATE, ONLY ONE LIVE, UNCONFIRMED SIGHTING.


OTHER STRANDINGS AND DEATHS.

APRIL 10, 2015, 160 DOLPHINS BEACHED JUST 50 MILES FROM FUKUSHIMA.
THE 'JAPAN TIMES' STATES IT COULD BE THE LARGEST SUCH EVENT IN JAPAN'S HISTORY.

INITIAL NECROPSY SHOWS WHITE LUNGS. ISCHEMIA.
ISCHEMIA HAS BEEN LINKED TO RADIATION DAMAGE IN CHILDREN OF CHERNOBYL, SURVIVORS OF THE ATOMIC BOMBS DROPPED ON JAPAN, AS WELL AS TO SOME RECEIVING RADIATION "TREATMENT", EVEN AT LOW DOSE. 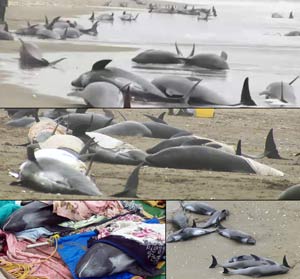 A local aquarium says this type of dolphin, also called the electra dolphin or melon-head whale, is usually found in deeper waters. It says it is unusual for so many to be washed ashore.

The BBC agreed: "According to BBC News, these species of dolphins are usually only found in the deep waters of the ocean. It is extremely rare for them to show themselves up on the beach."

Apr 11, 2015: After 149 melon-headed whales [washed up] in Hokota, seven more were stranded in nearby municipality of Kashima.

"Many people volunteered to rescue them but the dolphins became very, very weak."


Rescuers DID try to save the pod, but the ones who were carried back to sea returned to the beach.
It is believed perhaps three were actually saved.

Reported from Japan… "This case of dolphins beaching themselves is eerily similar to another phenomenon that has been noted recently… young sea lion pups ending up on the beach – starving and dazed."
JUST LIKE ON THIS SIDE OF THE PACIFIC!

AND ELSEWHERE...
I FAILED TO REPORT IN JANUARY ABOUT THE BEACHING OF 5 RARE CUVIER'S BEAKED WHALES ON THE WEST COAST OF SCOTLAND.

"To our southwest in Ireland, the Irish Whale and Dolphin Group have recorded similarly high numbers of Cuvier's beaked whales.
In December, five were found dead along the west and north coast which accounts for almost 10 per cent of all the records of this species since records began. "This brings to 10 the number dead Cuvier's beaked whales found in Scotland and Ireland since December, 2014.
Many more will go undetected as the carcasses may sink or end up in very remote locations.

Among the places where Cuvier's beaked whales have recently beached are at Borve Point on Benbecula in the Outer Hebrides.

The main threats include the accumulation of toxic pollutants in whale tissue and organs, entanglement in fishing nets and marine litter, and noise disturbance from naval sonars."

This species of beaked whale is thought to be the deepest-diving sea mammal on earth.
It feeds almost exclusively on squid.

ALL DURING 2014, REPORTS FROM ALL OVER THE WORLD TOLD OF STRANDINGS AND DEATHS OF VERY ODD DEEP-DWELLING FISH, SOME PREVIOUSLY UNKNOWN.

WHAT COULD BE CAUSING THESE DWELLERS OF THE DEEP TO RISE TO SHALLOW WATERS?

WHAT IS ALSO DRIVING DWELLERS OF THE SHALLOWS TO SHORE?

WHAT IS CAUSING THE MASSIVE DIE-OFFS OF SEA BIRDS?

FROM THE SMALLEST AND SIMPLEST FORMS OF OCEAN LIFE, FROM THE DEEPEST-DWELLING CREATURES TO THOSE WHO LIVE ABOVE THE WATER, ALONG THE OCEAN'S EDGE ASHORE, SOMETHING HAS AFFECTED OVER 200 SPECIES OF MARINE LIFE AND MANY OF THOSE ARE FACING WHAT NOAA AND OTHERS HAVE TERMED "EXTINCTION LEVEL EVENTS", "EXTREME MORTALITY EVENTS".

OCEAN ORGANISMS ARE LITERALLY MELTING RIGHT IN FRONT OF RESEARCHERS DIVING OFF THE PACIFIC COAST.

THESE CREATURES CAN ONLY TELL US SOMETHING IS WRONG BY THEIR DEATHS.

THOSE WITH HUMAN VOICES, SAILORS, FISHERMEN, NATIVE TRIBES PEOPLE , PACIFIC ISLANDERS, COASTAL DWELLERS ARE ALSO SAYING "SOMETHING IS VERY WRONG 'OUT THERE'!"

THE FOLLOWING WEBSITE HAS MANY PHOTOS AND LINKS TO NEWS STORIES ABOUT SOME OF THE THESE STRANGER FINDS FROM 2014.
[http://www.sott.net/article/279515-Creatures-from-the-deep-signal-major-Earth-Changes-Is-anyone-paying-attention]

I CAN'T HELP BUT BE REMINDED OF WEST COAST RESIDENTS WHO TRIED TO GET THE STARVING SEAL PUPS TO GO BACK INTO THE WATER, BUT THE PUPS WOULD FACE SAVAGE DOG ATTACKS AND HUMANS RATHER THAN GO BACK TO THE SEA, TIME AND TIME AGAIN.

I ALSO THINK OF THE WALRUSES UP NEAR THE ARCTIC CIRCLE, INTENTIONALLY CROWDING ONTO ANY AVAILABLE SPIT OF LAND AND STARVING THERE RATHER THAN GO BACK INTO THE SEA.
THE STORIES SOME OF THE LOCAL NATIVE TRIBES TOLD OF THE WALRUSES WERE HEART-BREAKING.

THE LOCAL NATIVE PEOPLE ALSO TRIED TO GET THE U.S. GOVERNMENT INVOLVED TO SEE WHY THE ORCAS WERE RISKING BEING STUCK IN ICE BY TAKING NEW MIGRATION ROUTES UP AND OVER THE NORTH AMERICAN CONTINENT, RATHER THAN MIGRATE  SOUTHWARD AS ALWAYS BEFORE THROUGH THE TROUBLED WATERS OF THE PACIFIC AGAIN.
THEY WERE SADDENED TO SEE SO MANY DIE TRAPPED BENEATH THE FAR NORTH'S ICE.

THE OCEANS' CREATURES ARE, I HONESTLY BELIEVE, TRYING TO SHOW US SOMETHING IS VERY, VERY WRONG "OUT THERE".

I HOPE ENOUGH PEOPLE PAY ATTENTION TO THEIR PLIGHT WHO CAN HELP THEM.

AS GO THE OTHER CREATURES OF PLANET EARTH, SO GO WE.

~ Health Effects of Chernobyl 25 years after the reactor catastrophe

~ Consensus holds that Fukushima constitutes the greatest radiological release into the ocean ever to occur.